Lamborghini and Callaway teamed up together to develop a new way of using carbon fiber that helps open the door to making parts that may once have been too complex to do using traditional methods. The outcome is called Forged Composite and it's already being used in Callaway golf clubs as well as Lamborghini's Sesto Elemento concept car. Some people call it Forged Carbon or Forged Carbon Fiber, it's all basically the same thing.

Rather than laying up woven carbon fiber sheets and impregnating it with resin which is your typical carbon fiber manufacturing, Forged Composite uses a paste of fibers or chopped fibers (500,000 turbostratic fibers per square inch) mixed with a resin that is squeezed out to make almost any shape. It can also be put into a compression mold. Since the fibers aren't oriented in any particular direction, the finished part is strong all around, while remaining light. While we don't know for sure, our initial thought is that a part made of Forged Composite may be strong, it is not as structurally strong as a traditional carbon fiber part (Any experts, please comment).

From an appearance perspective, it does look quite a bit different than the woven fibers we are used to seeing. I would say Forged Carbon is best described as a marbled carbon fiber appearance. Take a look at how our Forged Carbon case for the iPhone XS Max came out: Callaway developed a new line of drivers called the Diablo Octane in which they say "will overpower titanium". They state the driver is lighter, stronger, and has a faster head speed than one made of titanium. The increased power to weight ratio is said to increase the net drive by an impressive 8 yards. 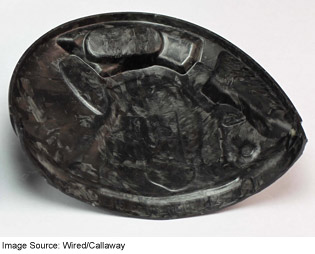 In a video with Roger Cleveland, Chief of Golf Club Design at Callaway, he illustrates how much of a titanium crown has to be ground away before its weight would match that of a Forged Composite one; about a third was taken off before the weights became equal.

Callaway conducted a study with consumers to see what they thought aesthetically of the composite on the driver and found that while people liked it, they prefer the "less is more" approach. In response, they designed the clubhead to only show accents of raw Forged Composite. Callaway will eventually phase out all of their titanium drivers in lieu of Forged Composite. They have released two videos, one about Forged Composite, and another about the new driver. They turned off the ability to embed the videos, so you'll have to watch on YouTube.

How Lamborghini Is Using Forged Composite

Lamborghini utilized Forged Composite on both the monocoque chassis as well as the suspension arms on the new Sesto Elemento concept car. While it's not used in a production car just yet, we expect to see it soon with replacements for the Gallardo and the Murcielago in the not too distant future (Update: Lamborghini is now using Forged Composite extensively in their mainstream vehicles). 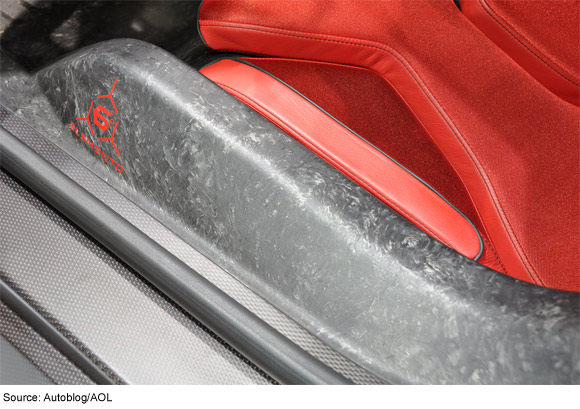 While Forged Composite in our opinion is not as visually pleasing as a traditional carbon fiber part, its potential for useful applications is exciting. We haven't heard if the cost of manufacturing is less than a traditional part, but our guess is yes. The process sounds like it would be much less labor-intensive and may even make use of injection molding that can help automate manufacturing.

Forged Composite, aka Forged Carbon is made from chopped carbon fibers that are infused with resin. This is typically done in a paste or a compression to create the shape of the product. The end result is generally not as strong as it's woven/laid up counterpart, but in volume can be less expensive because it requires a lot less labor. In turn, it has a higher cost because compression molds aren't inexpensive.

Learn More
Orders will be processed in USD.